Lairs of the haunted

Over the last few years Mark Rodda has been slowly creating an elaborate painted ecosystem; with each new work a previously unseen aspect of his dark and romantic world comes to light. With his exhibition dates coinciding with Halloween, his paintings have increased in their darkness. Rough terrain, shadowed mountains and craggy trees dominate his picture planes. Low cloud and fog envelope these environments, and in the title paintings, Lairs of the Haunted (I) and Lairs of the Haunted (II), mountain-perched buildings become gargoyle-like faces. Also included in the exhibition will be two large works depicting the Tasmanian highlands. This is a recent development for an artist who, in previous times, actively avoided replicating real locations.

Accompanying the exhibition will be a soundtrack pressed onto seven-inch vinyl, with original recordings produced specifically for the project. 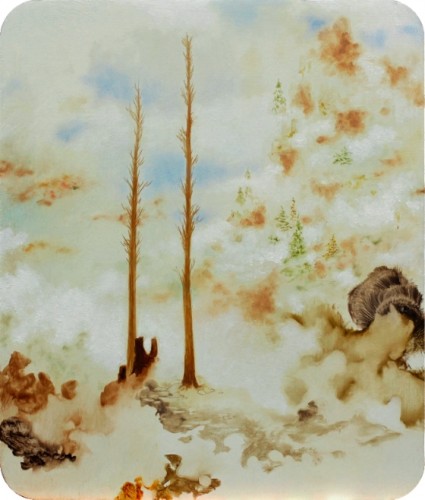